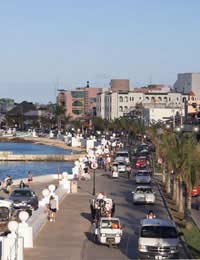 Mexico is a Spanish speaking country located south of the border with the United States of America. Its many beautiful beaches and rich cultural history have made it a popular tourist destination. Both its Spanish colonial past and Native American populations heavily influence Mexican society, and this fusion of cultures has created a unique and colourful set of traditions and social etiquette.

Mexicans are warm, compassionate, emotive and friendly people. They respect authority, and hierarchy and class are highly prevalent in Mexican society. When addressing a Mexican you should therefore always use formal titles, such as Senor, Senora or Doctor, followed by their surname. Although most Mexicans tend to have two surnames – their paternal and maternal family names – usually only the paternal surname (which is written and spoken first) is used when speaking and making introductions. If you are fairly familiar with your Mexican acquaintance, it is acceptable to use the formal title without the surname. The use of first names should only be initiated with your Mexican counterpart.

When meeting a group of people, the proper etiquette is to individually address and greet each person. You should also make a point of greeting restaurant and bar staff, shop assistants and other service providers with a salutation - learning some conversational Spanish will aid you in circumstances such as these. This is regarded as respectful behaviour, and you will find that in many cases, such a display of good manners will ensure a good service.

More formal introductions will require handshaking between men, and a right shoulder or arm pat between women. You may also find that men sometimes give a small bow when meeting a woman. Between family, friends and familiar acquaintances, a kiss one cheek might be initiated and received by women and a brief hug between men.

Be aware that when conversing, commonly Mexicans will stand quite close to one another and touch each other on the arm or back. Back-slapping and hugging is more common between male friends and family. Although you may not be used to being in such close contact and having less personal space, you should not make a point of moving away, as this could be regarded as an insult and bad etiquette. A prolonged grasp of the hand during the handshake can also be quite common – try not to break the handshake too quickly as this could also be considered as rude.

You should note that Mexico is quite a patriarchal society, and ‘Machismo’ is quite widespread. Machismo alludes to practices that display ‘very male’ (‘muy macho’) behaviour – typically displays of strength, virility and courage. Typically this will translate as wolf whistling (known as piropo) and winking, but a woman can also instigate this. It is more common for Mexican men to make comments that might otherwise be construed as sexist and wholly inappropriate in other countries. It is not meant to be seedy or perverse, and should be taken as a sign of admiration and appreciation. Demeaning a man for making such comments would be seen as an attack on his pride and masculinity, something that is very important to Mexican men.

Likewise, saving face is an important facet of Mexican culture. Publicly demeaning or attempting to humiliate a person, their family member or indeed any aspect of Mexican culture would be seen as both highly insulting and extremely bad etiquette. If you have any issues with a Mexican person, they should be dealt with privately and with dignity.

When invited into a Mexican home, it is good etiquette to bring a small gift with you. Flowers, chocolates or sweets, or a souvenir from your own country will all be well received. Make sure that you include gifts for children if you are invited to a family home.

If you decide to bring flowers, be aware that the colour yellow has connotations with death, red with the casting of spells, and white with the lifting of spells. Also avoid giving any gifts of silver – this is because Mexicans believe that their silver is of the highest quality, and giving a Mexican person silver from another country may suggest that you think otherwise.

Although an invite may specify a start time, it is actually proper etiquette to show up at least 30 minutes after the stated time. During dinner, you should wait for your hostess to begin before you start eating. Generally, only men are expected to give a toast during the meal. Also leaving a little food on your plate shows that you are sufficiently satisfied and don’t need any more food.