Home > North America > How to Behave in California

How to Behave in California 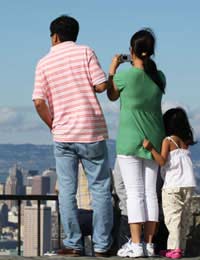 In the United States of America, California is often referred to as the "Golden State". This is partly in homage to its miles of beaches, deserts, and gold mining past. The State itself spans the majority of the western coast of the US, and has a booming economy that encompasses a variety of industrial sectors. Owing to its history and geographical proximity to the Pacific, California is a very culturally rich and diverse state. It also retains many cutting-edge and liberal approaches to environmental and social policies. However, certain current political issues such as Iraq should generally be avoided as subject matter in informal discussions.

When travelling in California, you should be careful not to stereotype all Californians as 'surfer dudes' or 'valley girls'. North and South California could be divided into two culturally and geographically distinctive regions.

The South has many well-established Spanish-speaking communities in residence. Whilst there are South Asian, Chinese and Korean communities around Los Angeles, the Bay Area in San Francisco in the North is well known for its deep-rooted Chinese, Vietnamese and South Asian communities. You should always be mindful that such communities retain many traditions and customs from their cultural heritage, so if you are planning on visiting these areas it might be considered good etiquette to learn a few rudimentary customs of the particular culture. Also, learning a few choice phrases in the mother tongues of these communities might come in handy. However, many of these ethnic communities are 'Westernised' and will adapt to most American customs in the presence of Westerners.

It's worth noting that when visiting San Francisco, it can be considered slightly rude or derogatory by residents to refer to the city as 'Frisco'. It should only be referred to by full name, or simply 'the city'.

Generally, outside of the beach culture, most Californians will not mind directness, as well as a degree of competitiveness. Being forthright but polite is considered the norm in etiquette, and displays of prosperity are not uncommon. This sort of confidence is also present in many Californians' approach to greeting - informality is usually quickly established and many will refer to clients or customers by first names, and should be taken as a friendly gesture. However, the formality of normal etiquette is usually still retained in the hospitality industry.

The Californian surfing lifestyle was peddled by the likes of the Beach Boys in the 1960s, and this cultural aspect is still very much in existence today. The relaxed attitude of surf and beach culture thrives in Southern California. Surfers will readily mingle amongst the Southern Californian cultural groups, the common element being the relaxed and informal approach to meeting and greeting. Generally, the etiquette of a firm handshake as a greeting is fine, but more informal greetings include hand 'slapping', and hand-gripping and a pat on the back. It's best to only reciprocate such casual greetings if instigated by the other party.

In line with the perception of California as a liberal state, there are a number of nudist beaches found here, each adhering to their own varying laws and etiquette. If you are planning on visiting, or accidentally stumble upon a nudist beach, you should make sure that you understand the basics, such as how and when it is appropriate to photograph.

California has a strict smoking policy. Smoking is banned in enclosed and public spaces, such as bars, restaurants, and shopping malls. You should only smoke in designated areas or private residence. Remember that in California you must also be over 21 to buy or consume alcohol.

Tipping is common in California and the US, especially in the hospitality industry. It is considered good manners to tip according to the quality of service you received. When eating out - unless the bill includes gratuity - the etiquette you would be expected to tip anywhere from 15% to 20% of the total bill. Although this may seem quite high in comparison to other countries, you should take into consideration that due to their relatively low wages, many restaurant staff here rely heavily on earning an income from tips.

Taxi drivers can be tipped around 10% of the full fare. For airport or hotel porters and bellboys, tipping is also expected if you are happy with the service. The going rate tends to be around 50cents or $1 per item of luggage.

Reader CommentsThe following comment was made by one of our readers:

In San Francisco at least (and most likely most urban centres) it is good etiquette to tip $1 per drink when ordering at a bar. This slides if ordering a large round ( 5 drinks +), but one good tip at the beginning of the night can ensure good service for the remainder. The opposite holds true, as well. This is especially true at the "dive bar" scene, where good tip can get you larger pours on spirits as well.

If entertaining, your co-diners/drinkers will notice what you tip. A poor tip will be viewed as being cheap by residents. Be too generous, though, and you're flaunting wealth, which is also bad.