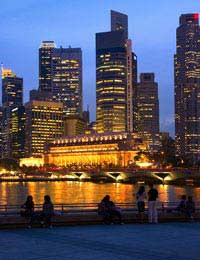 Singapore is a very diverse society consisting of three main ethnic groups: Chinese, Malay and Indian – with Chinese being the largest of these. With a relatively large population for such a small island, Singapore has a rich tapestry of customs and etiquette. The ethnic mix results in a very diverse nation, in both culture and religion.

The people of Singapore place huge importance on body language, and will often notice subtle gestures over-and-above verbal communication. For this reason, it is a good idea to be mindful about where you place your hands when communicating. For example, resting your hands on your hips is considered bad etiquette as Singaporeans consider this an aggressive posture. Similarly touching your head may cause offence, as the head is considered sacred.

Languages spoken in Singapore consist of: Mandarin, Malay, Tamil and English. English is often used in administration and government, as well as being the lingua franca. Verbal communication in Singapore is delicate, subtle and considered. This is at odds with the western world, where a fast pace of conversation is commonplace. For example, unlike communication in the western world, silences in Singapore are not considered uncomfortable. Instead silences display a degree of consideration, allowing the other party to contemplate what has been said. For this reason answers to questions should never be offered hastily or it is possible to cause offence.

Singaporeans will approach subjects gently, giving great consideration with whom they are conversing. They will avoid making direct statements, favoring a more suggestive tone.

When sitting in the presence of Singaporeans, it is proper etiquette to make sure that the soles of your feet face down and do not point directly at any one person. It is best to sit with your feet flat against the floor to ensure that you don’t accidentally offend anyone.

‘Saving Face’ is another important facet of society in Singapore. Singaporeans will therefore endeavor to retain a harmonious and respectable relationship with peers, family, the community and society at large. You can lose face, and therefore honour and dignity, if you are publicly or privately humiliated, and even in some circumstances face can be ‘lost’ through trying to demean someone else. ‘Face’ is not reserved for individuals; it can also apply to groups of people, such as family and fellow countrymen.

Respect is important to Singaporeans, and this is perhaps why it can be regarded as an egalitarian society. However, interestingly there is also an emphasis on hierarchy, particularly where age and community status is concerned. You should be aware that in Singapore, elders should be treated with the utmost respect. It is proper etiquette to always acknowledge the most elderly and senior person present first.

Handshaking is the most common form of greeting in Singapore, although this may depends on the ethnic origin of the person you are greeting. For instance, Muslim (Malay) men will shake hands, but women may not. The traditional greeting of Salaam, placing the right hand over the heart, is more common. Ethnic male and female Chinese and Indians will also shake hands, but Chinese will shake hands with the opposite sex, whereas ethnic Indians will not. It is best to see if a female will offer her hand first. If you are really unsure of what to do, a simple bow will suffice.

Due to the ethnic and religious diversity of Singapore, using the correct name and titles can become complex. The best course of action is to allow your counterpart to introduce him or herself, and if it is still not clear you can politely ask how they should be addressed.

When invited to dine out in Singapore, your experience and the proper etiquette that is needed may well be determined by the cultural heritage of your host or hostess. You should make a point of discreetly finding this out beforehand, and then becoming familiar with the relevant proper dining etiquette.

For instance, as Malays are largely practicing Muslims, meat will be strictly halal, and no pork is eaten. Alcohol is prohibited and food is eaten with utensils or the right hand. However, ethnic Indians tend to practice Hinduism or Sikhism, therefore beef is not served and vegetarianism can be widespread amongst this cultural group. Food can be eaten with the fingers, but again only with the right hand.

In contrast Chinese Singaporeans will use chopsticks to eat, and alcohol is not prohibited, but generally should not be ordered or drunk until the host or other guests begin to drink. Therefore, in the company of ethnic Chinese it would be considered proper etiquette to learn how to properly use chopsticks. It then goes that understanding related dining etiquette, such as never leaving your chopsticks stuck facing upwards in your food.