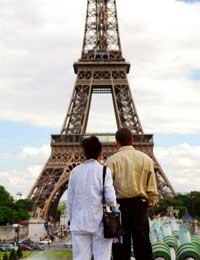 France has long been one of the most popular holiday destinations for the British. The scenery, climate, coastlines, mountains and culinary offerings have ensured this popularity for many decades.

Although France is just a hop, skip, ferry ride, Eurotunnel or Air journey away, don’t be too quick to assume that French social customs are no different to any other European etiquette. You might be surprised at how much difference a few miles and a stretch of water can make to such social etiquette.

France might be a popular destination for English-speaking tourists, but it is bad etiquette to assume that every French person will speak English. It might appear discourteous and arrogant to immediately begin speaking in English, hoping that your counterpart will.When attempting to converse in France, be it with a shopkeeper, waiter, policeman or local, you should as least make a certified and respectable attempt to speak some elementary conversational French. There are numerous basic French phrase books available, and it would be a good idea to get to grips with one prior to your trip.

However, if you are still not confident of your French-speaking abilities, after at least attempting a few phrases, if you and your French acquaintance are still struggling, you could politely ask if they speak English - “parlez-vous Anglais?”. If the answer is yes, it might be considered polite if you still interject what French you know into your sentences. This way you will be seen to be making as much effort as possible with your verbal communication.

The French may seem very direct and brusque in the way in which they speak – do not be surprised if you are asked seemingly personal questions. This is not bad manners, it just indicates an interest.

The French tend to be very direct in the way that they speak. They have relatively little reserve in showing emotion, and will often articulate and accompany their speech with large gesticulations. In some cases, especially when engaged in discussion or debate, this spirited emotiveness may come across as insistent or slightly aggressive, but usually is not meant as such at all. It might be considered good etiquette to engage yourself in conversation as vivaciously as your French acquaintance.Eye contact is also important, as it shows that you are alert and interested. You should try and maintain eye contact when in conversation or being introduced to a French person.

You should always begin by addressing your French counterparts by their title and surname, for example “Madame Chabert” or “Monsieur Agnes”. “Mademoiselle” is reserved for unmarried young women or girls, as older unmarried women can be referred to as “Madame”. When meeting and speaking to someone in France, even if they are your peer, you should start by referring to them with “vous” (you). This implies formality and respect, as “tu” (you) is used amongst friends and family. “Tu” should only be used if the word is instigated by your French counterpart, but this usually only occurs after a prolonged acquaintance. The same concept also applies to the use of a first name – this should only be used when once your counterpart has done so.

When meeting in France, you should shake the hand of every person present, including any children. Usually, the most senior or elderly people present will offer their hand to initiate a handshake first. In more familiar or social situations, your French host may initiate “une bise” – touching cheek to your cheek, whilst kissing the air. This is only usually occurs between familiar acquaintances and friends.

France is well known for its fine cuisine. Eating is an important part of social and family life in France, and the likelihood is that if you are visiting France, you will no doubt be eating out. You may even be invited into the home of a Frenchman, but in both cases you should be aware of basic French dining etiquette.

When dining out, if you need to request the bill, you should never snap your fingers at the waiter or waitress. This is extremely bad etiquette and can translate as rude and arrogant. The best way to ask for the bill is to catch the attention of the waiter or waitress’s by making a writing motion, as well as saying “L’addition s’il vous plait”.

When invited to dine at a French person’s house, you may want bring a good bottle of wine with you but be aware that in some parts of France such as Paris, this may be considered bad etiquette. This is due to the fact the host and hostess will have put a good deal of thought in the menu and the wine to accompany it, if you then bring wine with you they will feel obliged to serve it with the meal. By bringing your own wine the message that you will be sending is that you do not trust the host's tastes to select the proper wine. Proper etiquette is to send flowers or a bottle of good brandy or armagnac the next day.

You should not just dive into your meal – first, wait for your host to put their napkin on their lap, and then do the same. Once a drink has been served you should join in with the toast and once the host invites you to dine, it is then fine for you to start eating. It is polite to eat everything on your plate if you can manage, and at less formal dinners it is not uncommon to wipe the plate clean with a piece of bread. However, this should always be done using a fork.