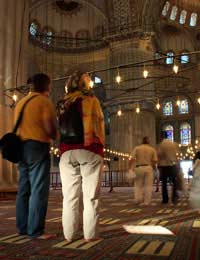 Turkey’s geographic location – on the border between Europe and the Middle East and Asia - has had some influence on the country’s culture as well as its popularity with tourists. The fusion of east meets west is most apparent in Turkey’s cities with the rural communities retaining many more f the old customs and traditions. However, wherever you chose to visit in Turkey, you should always be aware of some important rudimentary rules of etiquette.

The Importance of Religion

Turkey is a Muslim country, and many Islamic customs are integrated into society and the etiquette practised on a day-to-day basis. First and foremost, dressing and behaving modesty is a sign of respect in modern Turkey. Outside of a tourist resort, if women in particular are not dressed appropriately, they can attract unwanted reactions from Turkish people. It is best if women try to cover their arms and shoulders, and wear longer dresses. Men should try to keep their shoulders covered when out in public, and it is best to opt for longer trousers in the less tourist-driven areas.

If visiting a mosque, the dress code demands that women should cover their head, shoulders, arms and legs, taking care not to show ankles or feet. In both cases, shorts are not considered appropriate attire for men or women.

You should be aware that during the month of Ramadan, Muslims will fast from dawn until dusk. Some Muslims may drink alcohol, but devout Muslims will not. You should avoid excessive drinking and associated loutish or overzealous behaviour, as it will be seen as disrespectful.

Turkish people have some decidedly different gesticulations, so it is wise to learn what these are to avoid any confusion or embarrassment. Firstly, be aware that some rural areas, where religion has more of an influence over everyday customs and behaviour, women and men are expected to keep some distance apart in public. Therefore handholding, hugging and kissing are not undertaken. Even handshakes and eye contact between the sexes may be avoided. However in more urban locations, this is much more relaxed and there is a lot of integration between men and women. Handshakes and a kiss on each cheek between men and women are common forms of meeting and greeting.

Personal space between the same sexes is much smaller than in many Western countries, so you can expect to be bustled or shunted when queuing or in a crowded place.

The way in which a Turkish person will indicate ‘Yes’ is similar to the Western practice, in that it is just a small nod of the head downwards. However, ‘no’ is indicated by a nod of the head upwards, often with raised eyebrows or a sharp intake of air through the front teeth.

With sitting, the proper etiquette is that the soles of your feet, even when wearing sandals or shoes, should also stay flat to the floor, and should never be pointed directly at anybody. This would be seen as ignorant and disrespectful.

You might also find that you innocently make a vulgar gesture to a Turkish person – be aware that the ‘OK’ sign is actually a very rude and provocative signal, as is placing your thumb between your index and middle finger. Avoid these gestures at all costs!

If invited into a Turkish person’s home, the proper etiquette is to bring a gift with you to show your humbleness and gratitude. Small decorative pieces, sweets and pastries are the most common gifts, and you should remember to include children when offering gifts. Families are integral to Turkish society, so including the children will be seen as a very thoughtful and kind gesture. Alcohol may be given as a gift, but remember that not all Turkish people actually drink it.