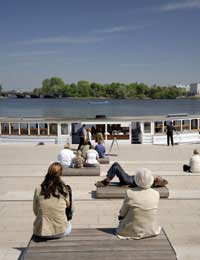 Germany is a popular holiday destination for many people especially as travelling from Britain to Germany is now easier and quicker than ever. In terms of social customs and etiquette, whilst the basic rules remain largely the same as with any other European country, you should make yourself aware of some slight but important cultural variations of German etiquette.

With regards to formalities, the English language is quite straightforward in that the use of “you” can apply to both formal and casual situations, and to all people. However, it is important to note that this is not the case with the German language. In German, there are two distinct forms of address – ‘Sie’ and ‘du’. If you intend on speaking some German, you should be aware that if you happen to use the inappropriate form of address, you run the risk of appearing somewhat rude, or conversely, too formal!

Familiarising yourself with the basic appropriate use of ‘Sie’ and ‘du’ is advisable. Basically, the use of “Sie” is reserved for professional and unfamiliar acquaintances, senior figures and those in a superior social or business standing. Generally, if a person refers to themselves as Mr (Herr) or Mrs (Frau) followed by their family name, you will then know that it is appropriate to use the more formal “Sie” form of address.

Once you become more friendly and well-acquainted with a German person, your friendship may develop into a first-name basis. This is often an indication that the use of “du” is now appropriate – however it might be best to see if your German friend initiates this gesture. Generally do not use 'du' unless specifically requested to do so by the other person.

Commonly, young children, friends and peers will address each other using the more familiar “du” form of address. If your German counterpart introduces himself using their first name, this is usually an indication that you can use “du”. If you are still not sure, the best course of action is to listen and note how your counterpart addresses you, so that you can then follow suit.

Once you are clear which forms of address are appropriate, you will then be equipped to make introductions properly. In Germany, when under more formal circumstances, a firm handshake should be used when meeting and greeting. This is acceptable between both men and women, but make sure that during introductions, you allow for a degree of personal space.

In informal situations, female friends and family will often meet and greet by offering a cheek and kissing the air. Men can pat or slap each other on the arm or back, but it is best to only do this if your German equivalent does so first.

You may be aware of the stereotyping of German people as being overtly punctual and efficient. This generalisation may actually have some bearing, as punctuality is considered to be very important in regards to most German people’s idea of ‘proper’ social etiquette! For this reason, when in Germany you should always retain your punctuality, whether you are convening with others on a tourist outing, attending a dinner party, or making an appointment with a professional.

Make sure that you give plenty of notice if you intend to call on a German person at home or in business. Merely turning up on someone’s doorstep is considered to be very bad manners. Similarly, if you think that you might be late to an appointment, meeting or social event, you should always make a point of calling your host or acquaintance to explain your late arrival. This is thought to be a common courtesy in Germany.

Travel Etiquette When Travelling in Russia
Share Your Story, Join the Discussion or Seek Advice..
Dear all, Commonly, young children, friends and peers will address each other using the more familiar “du” form of address. That's correct! If your German counterpart introduces himself using their first name, this is usually an indication that you can use “du”. However, usually "Youngsters" / "Teenies" do not introduce themselves indicating that you can use "Du"; usually, they are not that strict when you when you say "Du" immediately. But if you're not sure..., you can always ask in advance what they prefer, this solves the whole matter. I hope it was helpful.
Ai - 17-Jun-15 @ 9:14 AM
When greeting friends and family, nobody will kiss the air. This part must be a little bit older. Very close friends just give each other a hug while normal acquaintances might wave their hand while saying Hello. Generally you sould just wait what the other person does, as said in the article.
Paula - 3-Apr-12 @ 2:58 AM
Title:
(never shown)
Firstname:
(never shown)
Surname:
(never shown)
Email:
(never shown)
Nickname:
(shown)
Comment:
Validate: