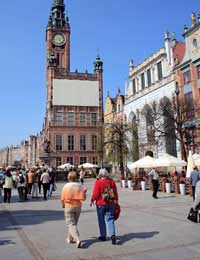 Poland is fast becoming an increasingly popular tourist destination especially amongst young travellers and backpackers. Poland’s cultural heritage is diverse with its fusion of east-meets-west, and is home to many historically significant towns with distinctive architecture. When you take into account that it also has a great many skiing and Baltic beach resorts, as well as a picturesque lake district, with so many attractions it is no wonder that its tourism industry is increasing. Despite its relative proximity to other central European countries, there are some customs, traditions and etiquette that may set Poles aside from their European neighbours. Make sure that you are aware of at least the basics before you set off on your trip.

Poland is now an autonomous country, and Poles tend to be very proud of their culture, long history and country. Poland’s recent turbulent history, particularly in the events leading up to, during and after World War II, is well documented. Although these events have had an impact on Polish culture and are within living memory, they are by no means the defining aspects of Polish society. It would be ignorant to assume such a thing. However, subject matter such as Communism and the Holocaust should be broached with care. In most circumstances the proper etiquette would be to only cover such topics of conversation if initiated by your Polish host.

Despite its history as part of the former ‘Eastern Block’, Poland was and still is very much in communication with wholly ‘Westernised’ countries. In terms of modern socio-political issues, this translates as a mixture of traditional Polish values meeting with contemporary westernised culture. You will find that whilst Poles will often uphold customs adhering to faith and family values, they are also open to new ideas and concepts.

Christianity is now the main religion practiced in Poland, with Roman Catholicism being the largest denomination. Roman Catholicism is therefore the foundation of many facets of Polish society, with a particular emphasis on the importance of honesty, family and community. Family values and the family itself are intrinsic to Polish culture, and as such gaining the trust and loyalty of a Pole and his family is extremely important.

The issue of trust therefore extends to the forming of acquaintances. You might find that on first meeting, many Poles are very formal and might even appear to be quite stern. Do not assume that this is the ‘real’ demeanour of that particular person, as often it is just a ‘front’ whilst trust and loyalties are established.

When greeting a Pole, it is proper etiquette to shake hands with members of the both sexes, although it is also polite to wait for a woman to be the first to offer her hand. Some Polish men may even kiss the hand of a woman. But when shaking hands you should retain a firm grip and an adequate amount of direct eye contact. However, be aware that too prolonged and direct eye contact might be interpreted as challenging.

Remember to always retain a completely formal approach when addressing your Polish counterparts. Unless you are invited to use first names, you should always use formal titles such as Mr (Pan) or Mrs (Pani) and the surname (family name).

Although some Poles may be able to hold a conversation in English, you should never travel to Poland without learning some conversational Polish beforehand. Being seen to make an effort would be regarded as respectful and polite, and will more than likely earn you some trust from your Polish acquaintances. You should always try to appear open and friendly, so smiling is encouraged when engaged in conversation.

You might find that some Poles are very direct in their questions about your personal life. Do not interpret this as bad manners, it is simply a way for them to learn more about you and establish an open and honest relationship. However, bear in mind that although Poles are very open in their communication, body language and gesticulations are subtler.

If visiting the home of a Pole, you should still retain formal greetings. Your host or hostess should only initiate informalities such as hugging between men and kissing between both men and women. You can bring a gift with you to show your appreciation for being invited into the family home. Wine is a fitting small gift, and flowers are very popular in for both formal and informal social occasions in Poland. Sending a ‘thank you’ card after the event is also considered proper etiquette.